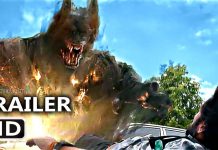 A new trailer for El Camino: A Breaking Bad Movie is now online. Only a few weeks remain until El Camino is finally unveiled, but Vince Gilligan and Aaron Paul have been doing their part to drum up hype. The pair recently took part in a THR cover story where topics like returning Breaking Bad characters and El Camino’s accessibility to non-fans were covered. Viewers are already onboard for what Gilligan has in store, but there’s always the desire to see a little more before the premiere. Capitalizing on that, a new preview is available.

The trailer opens on a shot of the titular El Camino, which is parked in an empty field during the dead of night. Inside, a figure — soon revealed to be Aaron Paul’s’ Jesse Pinkman —  can be seen lighting up a cigarette. Jesse is listening to a news report on the radio, which recounts an incident in which nine people were gunned down in his hometown of Albuquerque. Jesse looks in the car’s rear-view mirror, revealing severe scarring on his face and tears forming in his eyes, at which point the reporter informs listeners authorities are searching for a “person of interest who fled the scene.”

El Camino is set after the events of Breaking Bad‘s 2013 finale, which featured the apparent death of Bryan Cranston’s Walter White. The film centers around Walter’s partner in crime Jesse, who is pursuing freedom after escaping his captors. In addition to Paul, series alums such as Charles Baker and Matt Jones are also confirmed to be returning.