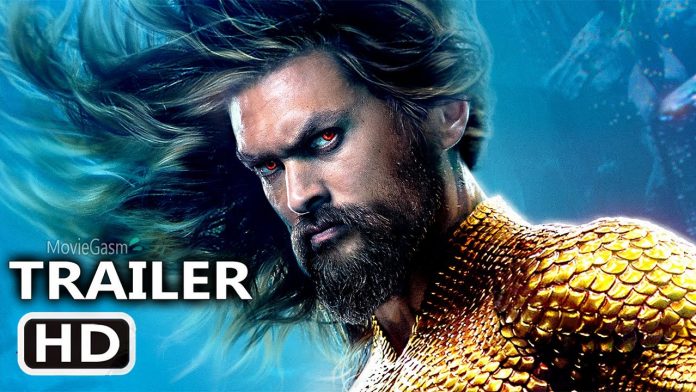 The first look at Aquaman and the Lost Kingdom arrived at DC FanDome.

Jason Momoa introduced a special look that features concept art and a number of behind-the-scenes shots, including several action scenes.

Momoa’s Arthur Curry/Aquaman debuted in 2016’s Batman v Superman: Dawn of Justice before returning for Justice League the following year and finally headlining his own solo film in 2018. Despite some mixed reviews, Aquaman was the first DC Extended Universe film to gross $1 billion worldwide.

By early 2019, the sequel was in the works, with Momoa, director James Wan, writer David Leslie Johnson-McGoldrick and co-stars Amber Heard, Yahya Abdul-Mateen II, Patrick Wilson, Willem Dafoe and Dolph Lundgren all eventually signing on to returning. Momoa also revealed that the premise for The Lost Kingdom was his own personal pitch. “I came in with a big pitch,” he explained. “I came in with the whole thing mapped out, and they loved it.”

“I love it so much that I participated in the writing of it,” Momoa said of the script in May. “And so we did the first treatment, and James [Wan] and our original writer David [Leslie Johnson-McGoldrick] finished it off. And all of our hearts are in it. Instead of just getting a script and doing that. You’re 100% being encouraged by your director and co-writers so that’s exciting for me. And I’m excited to go over there.”

Momoa also recently discussed how The Lost Kingdom will double down on the comedic elements from the first film. “This Aquaman, this time around, I feel like we’re pulling out all of the stops, buddy,” the actor said. “Like, it’s… we all learned something on the first one. It’s exciting because I haven’t made too many sequels. There is so much going on. I think the stakes are a lot higher. There’s a lot of comedy. So, I mean, I giggled reading it.”

Despite some familiar elements from Aquaman, Wan noted in September that The Lost Kingdom will also be more complex than its predecessor, saying, “There are more complexities in Aquaman 2 than in the first movie.”