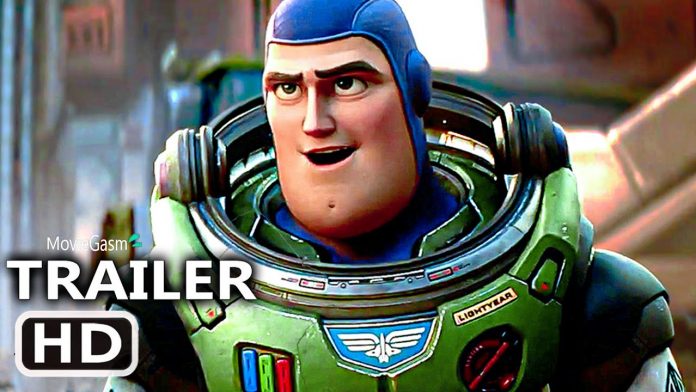 Disney and Pixar released the first teaser trailer for the Chris Evans-starring Lightyear.

The trailer begins with a Space Ranger taking flight. That Space Ranger, of course, is none other than Buzz Lightyear. After seeing Buzz skirt the surface of the sun, explore strange planets and fend off an alien, the trailer ends with a tease of the infamous catchphrase, “To infinity, and beyond.”

“The phrase ‘a dream come true’ gets thrown around a lot, but I’ve never meant it more in my life,” Evans said. “Anyone who knows me knows that my love for animated films runs deep. I can’t believe that I get to be a part of the Pixar family and work with these truly brilliant artists who tell stories unlike anyone else. Watching them work is nothing short of magic. I pinch myself every day.”

Lightyear was announced in December 2020 during the Disney Investor Day presentation. As confirmed by Evans at the time, the film isn’t about the Buzz Lightyear Toy Story fans are familiar with (voiced by Tim Allen) — rather, it’s “the origin story of the human Buzz Lightyear that the toy is based on.” This is further supported by Disney’s new Lightyear synopsis, which reads, “The sci-fi action-adventure presents the definitive origin story of Buzz Lightyear—the hero who inspired the toy—introducing the legendary Space Ranger who would win generations of fans.”

Notably, Lightyear will be a theater-exclusive film after Pixar’s last two releases — Soul and Luca — went straight to Disney+ as a result of the COVID-19 pandemic. Prior to Lightyear, Pixar will release Turning Red, which is also expected to be exclusive to theaters.

For Evans, Lightyear marks a familiar-yet-different path in the actor’s trajectory. Having played Steve Rogers in three Captain America films, four Avengers films and a cameo role in Spider-Man: Homecoming, he’s certainly no stranger to Disney properties. However, his only notable prior animation work to date is voicing Casey Jones in 2007’s TMNT.