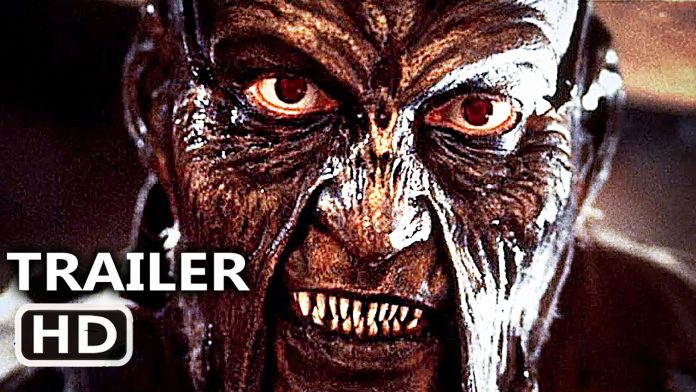 Screen Media Films has dropped the first teaser for Jeepers Creepers: Reborn. The fourth installment of the Jeepers Creepers horror movie series, the latest sequel is written by Sean Michael Argo and directed by Timo Vuorensola. The first look teaser trailer is very brief, but it packs a lot of action into just 15 seconds. You can watch the footage below.

A plot synopsis for the movie was previously released. It reads, “The film unfolds as the Horror Hound festival holds its first ever event in Louisiana, where it attracts hundreds of geeks, freaks and die-hard horror fans from far and wide. Among them is fanboy Chase and his girlfriend Laine, who is forced to come along for the ride. But as the event approaches, Laine begins to experience unexplained premonitions and disturbing visions associated with the town’s past, and in particular, local legend/urban myth The Creeper. As the festival arrives and the blood-soaked entertainment builds to a frenzy, Laine believes that something unearthly has been summoned…and that she is at the center of it.”

A statement released by Screen Media when the movie was first announced added, “As excited as we are, we know that fans will be even more thrilled (and chilled) to return to the world of the Creeper, now with a much scarier vision from director Timo Vuorensola, who is the perfect fit to restart this franchise.”

Mentioning a “much scarier vision” is referring to the addition of a new director to take the reins of the franchise. The first three movies were directed by Victor Salva, culminating with 2017’s Jeepers Creepers 3. Salva, whose well-known history of sexual abuse has drawn great backlash for his continued involvement in the series, is not involved with Jeepers Creepers: Reborn. The idea for this new installment is to launch a new trilogy without Salva attached.

The Jeepers Creepers series was started with the release of the original movie in 2001. It tells the story of a demonic creature called The Creeper who terrorizes a pair of siblings unlucky enough to stumble across him. The Creeper returns to attack a school bus full of teenagers in the 2003 sequel Jeepers Creepers 2, and while it wasn’t a hit with critics, it was still a big success at the box office.

Jeepers Creepers 3 came along in 2017 with Jonathan Breck reprising his role as The Creeper. Original movie star Gina Philips also came back for a cameo as Trish Jenner. It was not met with a very warm reception when it was released in theaters for just one day, in part due to the controversy attached to Victor Salva’s involvement. The new movie will essentially be treated as a complete reboot with the apparent hope of salvaging the franchise by moving on without Salva.

Jeepers Creepers: Reborn will be released sometime in 2022.