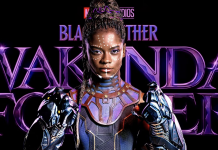 The first full trailer for Fox Searchlight’s Jojo Rabbit has been released, and it offers a longer look at Taika Waititi’s hilarious portrayal of Adolf Hitler.

The film, which is based on the novel Caging Skies, is one of the more anticipated offerings of the fall due to the combination of premise and talent involved. It tells the story of Jojo Betzler, a Hitler youth who discovers his mother is secretly sheltering a Jewish girl in their home. Described as an “anti-hate satire,” Jojo Rabbit has already made headlines thanks to Waititi’s portrayal of Jojo’s imaginary friend, a fictionalized version of Adolf Hitler.

In the trailer, we see the main character Jojo (Roman Griffin Davis) questioning his national pride after he finds a young Jewish girl (Thomasin McKenzie) that his mother (Scarlett Johansson) has been hiding in their home. In the midst of this confusion, Jojo turns to his imaginary friend Adolf Hitler for guidance.

After Jojo Rabbit, Waititi will be working on another film for Fox Searchlight called Next Goal Wins. He is also writing and directing Thor: Love and Thunder.

Tessa Thompson Reveals ‘Thor 4’ Has Been Pitched To Marvel