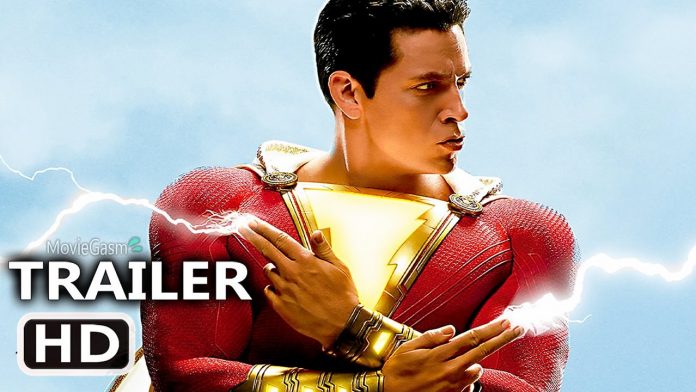 The first look at Shazam! Fury of the Gods debuted at DC FanDome.

The footage features behind-the-scenes looks at the film, including villains Helen Mirren and Lucy Liu, as well as the battle-damaged suit of Zachary Levi’s eponymous hero.

Released in April 2019 in the United States, Shazam follows the 14-year-old Billy (Asher Angel), who is gifted the ability to transform into the adult hero Shazam (Zachary Levi). With the help of his foster brother Freddy (Jack Dylan Grazer), Billy is able to master his powers—including flight, super speed and lightning—to defeat the evil Sivana (Mark Strong), who allied himself with the Seven Deadly Sins. The film was directed by David F. Sandberg and written by Henry Gayden. It grossed $365 million at the global box office off an $80-$100 million budget.

Development on Shazam 2 began shortly after the first film premiered in 2019. Production for the sequel began in May 2021 and wrapped later that summer. Sandberg is returning as director, while Gayden is writing the script. Returning cast members include Levi, Angel, Grazer, Adam Brody as Freddy’s adult, superhero self and Djimon Hounsou as the original Shazam.

New cast members include Helen Mirren and Lucy Liu, who will portray the villainous sisters Hespera and Kalypso, respectively. Also joining the cast is Rachel Zegler, who is playing a third, unnamed sister. While the three characters don’t have DC Comics counterparts, they will be presented as the daughters of Atlas.

One character who won’t appear, though, is Dwayne Johnson’s Black Adam, Shazam’s nemesis. Johnson’s character will get his own film, set to premiere in theaters July 29, 2022. That cast includes Aldis Hodge, Noah Centineo, Sarah Shahi, Quintessa Swindell and Pierce Brosnan.

This was Shazam: Fury of the Gods‘ second time appearing at DC FanDome, with last year’s presentation revealing the title of the film (which, at the time, was only known as Shazam 2) and its first poster. Fans were also treated to new and/or first looks at Aquaman and the Lost Kingdom, The Flash and Black Adam, with The Batman still to come.