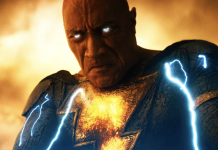 With Terminator: Dark Fate arriving in theaters in just one month, the upcoming sequel has released a new trailer focusing on its new hope for humanity, Dani, protected by Sarah Conner and Grace, a cyborg warrior from the future.

Terminator: Dark Fate has received a new, partly Spanish trailer from Paramount. Whereas the previous trailers highlighted Mackenzie Davis’s Grace and Linda Hamilton, this time Natalia Reyes’s character is given the spotlight. Check it out above.

Soon after Dani leaves for work at a local factory, her father is visited by Diego Luna’s Rev-9, the latest killer robot from the future who’s a hybrid of liquid metal and a solid cybernetic endoskeleton. Taking on the guise of her father, he nearly kills Dani before she’s rescued by the mysterious new time-traveling hero Grace as they cross paths with a gun-toting Sarah Conner.

“My name is Sarah Conner. I hunt Terminators,” the battle-hardened Conner tells Dani and Grace. “Enough of a resume for you?”

Natalia Reyes’s character, Dani, plays a key role in the story. As all of the trailers have shown, apparently her dying means severe consequences, which is a plot point Terminator fans will be familiar with. In the new trailer, viewers see how Dani and Grace meet. The movie puts a twist on the classic “Come with me if you want to live” line in this sequence, where Grace says, “Come with me or you’re dead in the next 30 seconds.” One interesting piece of dialogue is at the end when Sara Connor tells Gabriel Luna’s character, “Because we’re not machines,” despite standing next to the original Terminator. This could mean she no longer wishes to kill Schwarzenegger’s character, despite a line in another trailer. Either way, the new trailer features old footage, but plenty of new scenes worth analyzing.

‘Orange Is The New Black’: New Trailer For FINAL Season