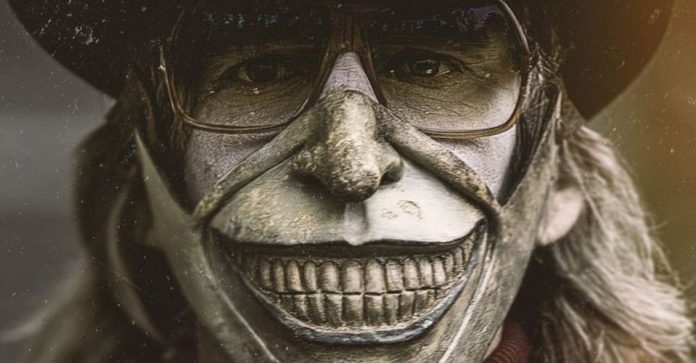 Blumhouse has released the first trailer for The Black Phone, its latest horror feature from writer/director Scott Derrickson.

The trailer takes viewers to the Colorado suburbs in the ’70s and introduces 13-year-old Finney Shaw (Mason Thames) as he is abducted by a serial killer known only as “The Grabber” (Ethan Hawke). Finney is trapped in a soundproof basement with nothing but a mattress and a disconnected phone on the wall but soon finds that the phone can actually receive calls from the ghosts of the Grabber’s prior victims. With their guidance, Finney tries to make his escape from the Grabber’s clutches, all while his sister Gwen (Madeline McGraw) searches for him on her own. Co-stars in the film include Jeremy Davies as Mr. Shaw and James Ransone as Max.

The Black Phone is directed by Derrickson and co-written by Derrickson and C. Robert Cargill, based on a short story by Joe Hill. Cargill shared praise for Hill’s work when the film was announced, writing, “Joe’s short story is amazing. Scott and I have been talking about making it for almost a decade now. A kidnapped kid. A creepy, soundproofed basement. An ancient, disconnected phone. Then, when night falls, the phone rings.”

Derrickson is known for his work in the horror genre with films like The Exorcism of Emily Rose and Deliver Us From Evil. He also collaborated with Cargill on the scripts for Sinister, Sinister 2 and Doctor Strange. Derrickson was set to return to direct the sequel to Doctor Strange but stepped down due to creative differences with Marvel Studios. As such, Sam Raimi is filling the director’s chair for Doctor Strange in the Multiverse of Madness, with Derrickson attached as an executive producer.

A new synopsis for The Black Phone is below:

The phone is dead. And it’s ringing.

Director Scott Derrickson returns to his terror roots and partners again with the foremost brand in the genre, Blumhouse, with a new horror thriller.

Finney Shaw, a shy but clever 13-year-old boy, is abducted by a sadistic killer and trapped in a soundproof basement where screaming is of little use. When a disconnected phone on the wall begins to ring, Finney discovers that he can hear the voices of the killer’s previous victims. And they are dead set on making sure that what happened to them doesn’t happen to Finney.