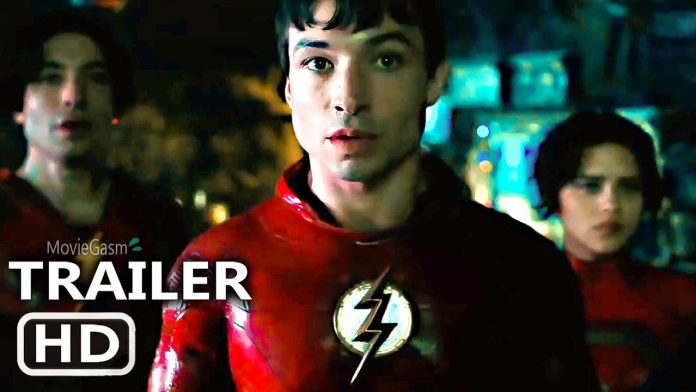 Warner Bros. and DC’s The Flash movie trailer is released. Although Ezra Miller was cast as Barry Allen in the DC Extended Universe way back in 2014, and made his debut in 2016’s Batman V Superman: Dawn of Justice, the actor’s solo movie has been hit with quite a few delays. The Flash has seen multiple writer and director changes throughout its development, but eventually landed on IT helmer Andy Muschietti and Birds of Prey screenwriter Christina Hodson. Since then, things have moved forward quickly and taken some surprising turns, including confirmation of Michael Keaton returning as Batman from the 1989 Tim Burton Batman movie and its sequel.

In addition to Keaton, Ben Affleck will play Batman in The Flash, reprising his DCEU role, while Sasha Calle will make her debut as Supergirl. Rounding out the movie’s human characters are Kiersey Clemons returning as Iris West from Zack Snyder’s Justice League, while Ron Livingston is taking over the role of Barry’s father Henry from Billy Crudup, and Maribel Verdú will play Barry’s mother Nora. There’s a great deal to be excited about with The Flash movie, not least of which being its multiverse-exploring story and the return of Keaton as Batman more than 30 years after first donning the Batsuit. Now, a new video reveals footage from the DC film.

During DC FanDome 2021, The Flash movie trailer was unveiled, check it out in the video below. Miller introduced the The Flash movie teaser trailer and though he specifically states it’s neither a teaser nor a trailer, it does feature enough footage from the upcoming DC film to provide a good first look. The Flash movie trailer teases the film’s Flashpoint storyline by showing Miller’s Barry Allen going back in time and visiting his mother and establishes the multiverse storyline by introducing a second version of Barry Allen – also played by Miller. Further, Keaton’s Batman return is teased with a shot of his cowl in the Batcave and Calle’s Supergirl appears in one brief shot of her with the two Barrys.

There’s quite a bit to unpack in The Flash movie trailer despite how little footage was revealed. Keaton’s Batman return is perhaps the most exciting aspect, even though only the actor’s Batsuit cowl is revealed. Still, the shot of Keaton’s Batman in his Batcave confirms that not only will the character return, but the hero’s locations – and, presumably, his universe – will also appear in The Flash. It’s possible that all the shots of Wayne Manor that are in the footage are also meant to belong to Keaton’s Batman, while the final shot of the footage teases the reveal of a Batmobile, which will also likely be Keaton’s.

Beyond Batman, The Flash movie trailer confirms two Barry Allens appear in the movie, something that was teased through unofficial set photos from the production. It seems the second Barry with the longer hair will don the Batman costume painted with the Flash’s colors that was teased by Muschietti during production. Where exactly this Barry comes from remains to be seen, but it’s no doubt he hails from another universe in the multiverse – perhaps from Keaton’s universe. Curiously absent from The Flash movie trailer is Affleck’s Batman, who’s been confirmed to appear but hasn’t been teased as much as the other heroes. This could mean his role is very small, but that remains to be seen. More will be revealed when the full The Flash movie trailer is revealed – likely sometime next year.