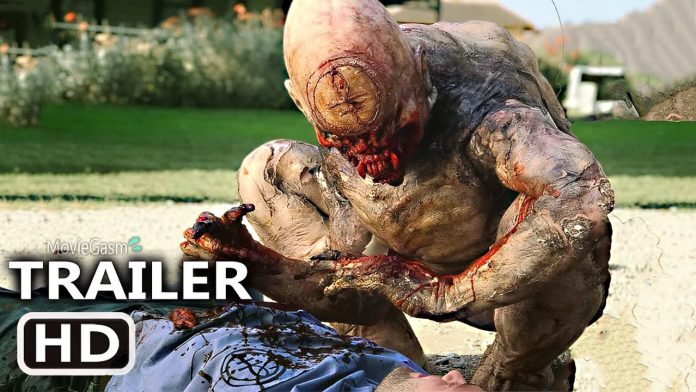 If you find a mysterious door in the woods, it’s probably best to keep it closed. You never know what’s going to come out from the other side.

The Peacock original series The Girl in the Woods expands upon the Crypt TV short film The Door in the Woods. The supernatural drama tells the story of a door in the woods that leads to a terrifying monster dimension.

Check out the trailer below:

“In the woods stands a lone door. My colony and all of our practices exist entirely to protect the world from the awful things beyond that door,” Carrie, played by Stefanie Scott, says ominously in the trailer.

Set in the Pacific Northwest, The Girl in the Woods follows Carrie’s escape from her mysterious, cult-like colony that guards the world from monsters hidden behind a secret door within the woods. As she faces her demons, she’ll bond with two new friends, Nolan (Misha Osherovich) and Tasha (Sofia Bryant). According to Peacock, in addition to supernatural mystery, the series will focus on contemporary social issues like LGBTQ+ discrimination, the human cost of environmentalism and the consequences of inequality.

In addition to Scott, Osherovich, and Bryant, the series stars Will Yun Lee, Kylie Liya Page, Reed Diamond, and Leonard Roberts. Krysten Ritter directs the first four episodes of the series, and Jacob Chase directs the last four. The Girl in the Woods was written by an all-women writing team, headed by Jane Casey Modderno. Crypt TV produces the series.

The Girl in the Woods premieres Thursday, October 21 on Peacock. All eight episodes will drop at once, so you can plan to get your binge on with this one.