The reboot’s first episode, “The Comedian,” is free for anyone to watch via the CBS All-Access YouTube channel.

This debut episode stars Kumail Nanjiani as a standup comedian who gets some truly life-chaning advice from one of his comedy idols, Tracy Morgan’s JC Wheeler.

As of April 1, The Twilight Zone will be available exclusively through CBS All Access. Those interested will need to pay $5.99 per month (there’s a commercial-free option for $9.99), or they can use the seven-day free trial to see if Peele’s reboot is worth the investment. Two episodes will air on April 1, and the series will resume on April 11, with one episode airing every Thursday.

There will be a total of 10 episodes of the first season of Jordan Peele’s Twilight Zone and future episodes will star the likes of Seth Rogen, Chris O’Dowd, Zazie Beetz, Taissa Farmiga, Ginnifer Goodwin, John Cho, and Steven Yeun. 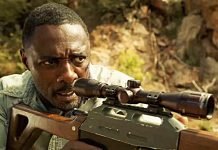