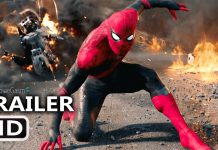 The trailer, which you can see above, gives fans their first official look at Bloodshot and Diesel as the title character. The footage itself is particularly brutal, much like the teaser that was released for it.

The trailer introduces Diesel as Ray Garrison, a soldier who was killed alongside his wife, Gina (Talulah Riley), only to be resurrected and enhanced with super-strength and super-healing through nanotechnology by the RST corporation. However, as this Bloodshot preview is quick to establish, Ray’s memories are not only fragmented, they’re also being intentionally altered by RST to fool him into believing he’s hunting the people responsible for his and his wife’s death. In these regards, both the movie and the Bloodshot character continue to bring RoboCop to mind, as well as superheroes or antiheroes with similar backstories and/or powers, like Wolverine and The Punisher. Bloodshot also appears to be going for a violent, possibly R-rated tone along the lines of those properties.

The Bloodshot comic follows an amnesiac soldier named Raymond Garrison who can rapidly heal and shapeshift (thanks to nanites in his blood) on a quest for vengeance. The character was originally created by Kevin VanHook, Don Perlin and Bob Layton and first appeared in 1992’s Eternal Warrior #4.

Directed by Dave Wilson (VFX Supervisor for Avengers: Age of Ultron) with a script by Eric Heisserer (Arrival) and Jeff Wadlow (Truth or Dare), Bloodshot stars Vin Diesel, Guy Pearce and Toby Kebbell. The film is slated to arrive on February 21, 2020.