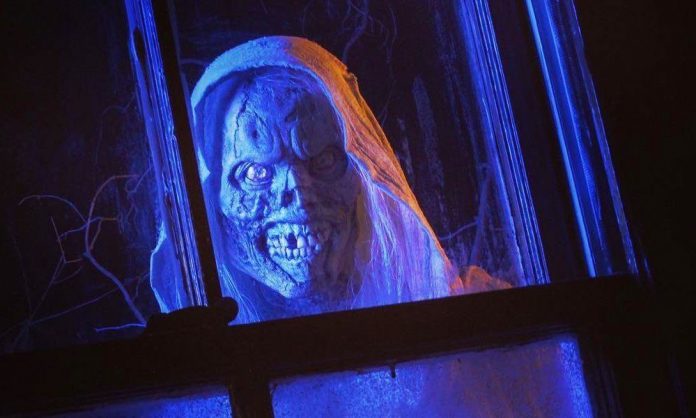 Greg Nicotero has given fans their first look at Creepshow, and it may give you nightmares. Nicotero announced that the first episode has wrapped filming, and also offered a first look at the new version of The Creep. Following in the footsteps of the 1982 film produced by George Romero and Stephen King, the anthology-style Creepshow series will offer up seven new horror stories when it debuts this year on streaming service Shudder.

The seven-episode season, which began production in Atlanta, Georgia earlier this month, will feature a variety of talented writers penning the episodes, with one episode being based on the Stephen King short story “Survivor Type” from the collection Skeleton Crew. The other episodes include:

“House of the Head” by Josh Malerman ( Bird Box )

“The Companion” by Joe Lansdale ( The Bottoms )

“The Man in the Suitcase” by Christopher Buehlman ( The Lesser Dead )

“All Hallows Eve” by Bruce Jones ( The Hitchhiker )

“Night of the Paw” by John Esposito ( The Walking Dead: Webisodes )

The TV series will be an anthology of original stories, each made by a different director, with the series scheduled to kickoff on Shudder in 2019. Nicotero’s KNB EFX Group will create the creature and makeup effects on the show, which will be produced by The Cartel with Monster Agency Productions, Taurus Entertainment, and Striker Entertainment.

The original Creepshow itself was of course inspired by the EC and DC horror comics of the 1950s, and featured five different terrifying stories written by King. The movie was followed by the sequel Creepshow 2 in 1987 as well as a highly forgettable third installment Creepshow 3 in 2007.
A release date has not yet been set for Creepshow. When it does premiere, it will do so on Shudder. It is currently expected to bow during 2019, so stay tuned.