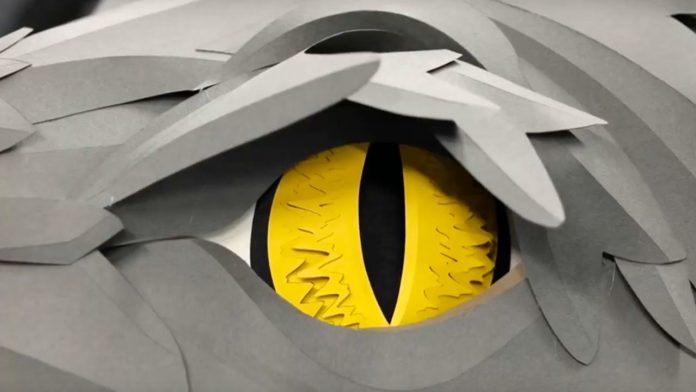 Viking Direct, a UK based office supply company, built a paper dragon to honor the final season of Game of Thrones. Artist Andy Singleton was assigned the task of carefully crafting the dragon from start to finish. The task took a total of 10 days (100 studio hours) to design and create.

According to Viking Direct, the project was kept under wraps to give their staff a Monday morning surprise. The artist used 1,200 sheets of A4 paper to create a massive 13-meter-long dragon which took an additional 10 hours to install the creation in the Viking office. When it came down to the theme in which they wanted to base the project around, it was a no brainer.

“We knew we needed something massive, something striking. And with dragons being a common feature in many of our favourite films and TV shows this year, the mythical creatures were already at the forefront of our minds,” according to Viking Direct’s blog.

Artist Andy Singleton also shared his thoughts on the project:

“I wanted the dragon to be an expression of my approach and style of work, so I did not look at any other reference images while making it, apart from my drawings. I wanted parts of the dragon’s armour to look like faceted minerals, but also to have softer elements almost like fur on the underside. The colour choices just felt right when I was selecting the specialist paper”.

With the final season of Game of Thrones approaching, outlets are creating massive buzz for the series. Last week, Saturday Night Live hosted GoT’s Kit Harington and aired a hilarious “prequels, sequels and spin-off” series that many fans are wishing were part of the actual series. A week before this, the Bellagio casino-resort began featuring fire breathing dragons through their water display at the Bellagio fountains.