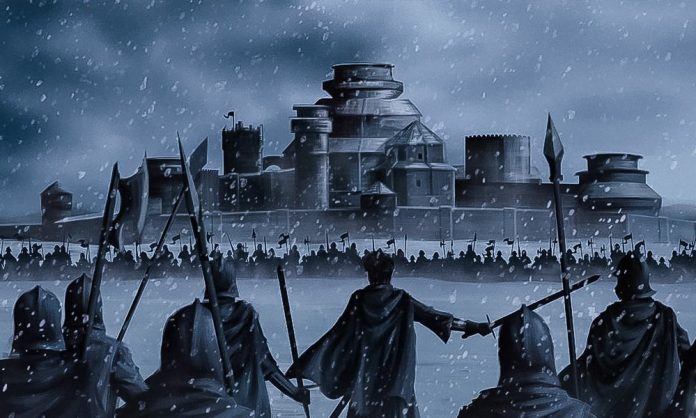 Mankind’s last stand against the Army of the Dead is on its way. HBO released six new photos from the upcoming episode. It promises to be the most action-packed installment in the series’ history.

Game of Thrones‘ newest battle-heavy episode clocks in at 82 minutes. Thrones writer and co-executive producer Bryan Cogman offers up this much of a tease. “The battle will be of a size and scale unparalleled and unprecedented in the history of filmed entertainment.”

With that said, Lord Snow himself looks well and thoroughly exhausted in the run-up to the big fight. His hair a mess, cloak withdrawn, blood and muck scrawled on his face with the glow of fire behind him. It’s a far cry from how he appears in another of the photos, in which he stands next to Daenerys Targaryen (Emilia Clarke), fully cloaked and watching Winterfell from a fairly comfortable distance.

Varys (Conleth Hill) and Tyrion (Peter Dinklage) are together in the crypts. This is supposedly the safest place in Winterfell. In the episode ahead that reputation stands to be put to a major test. It’s speculated that the bones of old Stark lords will rise at the Night King‘s command.

Check out the rest of the Winterfell war’s photos. Featuring Ser Brienne of Tarth (Gwendoline Christie) leading her army alongside Jaime Lannister (Nikolaj Coster-Waldau). As well as the Stark sisters in the thick of the fight for the soul of their home.

Game of Thrones Sundays at 9 p.m. ET on HBO

(Game of Thrones: The Fight Is on in Season 8 Trailer)_