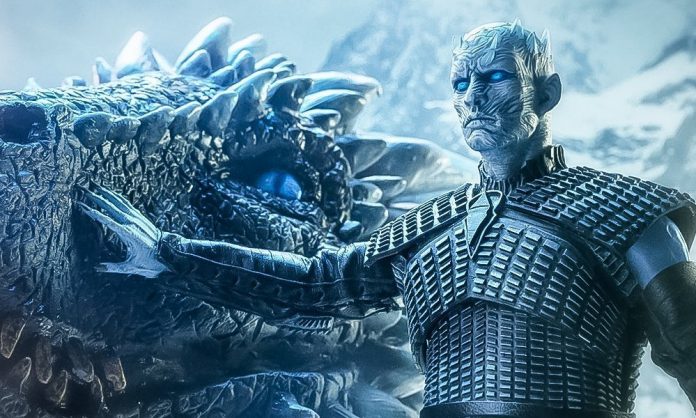 MAJOR SPOILERS FOR GAME OF THRONES AHEAD!

This week’s episode of Game of Thrones promises to include one of the biggest and bloodiest battles in television history and one super fan thinks they might have spotted a huge spoiler 21 seconds into this week’s trailer:

YouTube channel New Rockstars has released their weekly GOT trailer review. They say one clip shows Jon Snow wielding his sword, hinting at a possible duel with the Night King.

MAJOR SPOILERS FOR GAME OF THRONES AHEAD!﻿

At 6.46, the vlogger says: “Jon unsheathes Longclaw, his Valyrian steel sword, there’s a tree behind him suggesting this could be in the God’s Wood and Jon is confronting the Night King.” Will we finally get to see King of The North do battle with the dreaded leader of the undead?

But if not, it still promises to be an incredible episode. It could possibly answer the question every fan has asked themselves since the very first episode. Who will sit on the iron throne?

Though he wouldn’t give much away, Kit Harrington (who plays Jon Snow) said it took more than two months to film the gruelling episode and the cast were ready to do each other in. Speaking to Graham Norton, the actor said: “I’m not sure I should tell you about it, but it was so intense we were all on the edge of killing each other. They have really upped the budget and gone to town – it is really exciting. There are some incredible sequences, but I’ve woken up in the middle of the night recently thinking, ‘What if, after eight seasons, we have mucked it up.”

But not everyone thinks the Night King will show up for the mega battle. Instead, jumping on his zombie dragon and heading south to King’s Landing. At the end of ‘Knight of the Seven Kingdoms’ we saw the terrifying skeleton army, headed up by the White Walkers, but no Night King. Also absent was the zombified dragon formerly known as Viserion that now acts as the Night King’s skeletal steed.

It’s not easy to miss a gigantic ice dragon being used as a runabout by a terrifying blue zombie king. So that gets us to thinking – are they there at all? Remember all those years ago when Bran Stark had those visions of a dragon flying over King’s Landing? Well – this could be it.

The third episode in the final season of Game of Thrones will air Sunday Night on HBO.