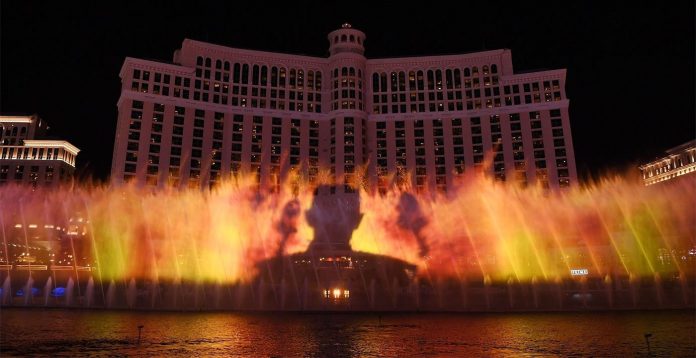 The fountains at the Bellagio casino-resort displayed a huge change to its popular water show.

In honor of the Game of Thrones eighth and final season, spectators were able to witness an epic water display that featured fire-breathing dragons at the Bellagio fountains this Sunday.

The 3½ minute water show foreshadows that dragons will play a big role in the upcoming season. Synced with the Game of Thrones “Winter is Here” theme in the background, images of dragons breathing out fire, the Night King walking in a triumphant fashion, and live fire lighting up the water surface were displayed as part of this spectacular event.

Despite the images teasing what is to be expected of the finale season, the CEO of WET Design claims that they did not reveal any unknown elements of the new season.

“We didn’t just want to portray literally scenes from ‘Game of Thrones’ here, not like a teaser or a preview of season eight,” said WET Design CEO Mark Fuller, the company that created the fountains and show. “We want to bring you the emotion.”

As advertised, the display will run nightly through April 13. Games of Thrones season 8 will premiere April 14 on HBO.