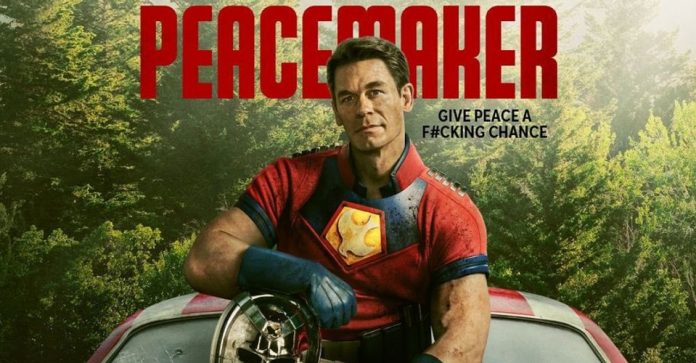 The poster depicts Cena sitting on top of his car, with both his helmet and oversized pistol resting comfortably in his lap. The promotional account for Peacemaker took aim at New York City’s Metropolitan Museum of Art in its tweet, implying that it belongs in the museum’s hallowed halls. Additionally, Peacemaker let fans know that they can watch the first trailer for the show next week, saying, “you can see even more of my work in the #Peacemaker teaser at #DCFanDome.”

Peacemaker is a new series coming to HBO Max that serves as a spiritual sequel to James Gunn’s film The Suicide Squad. Gunn will be returning as writer, director and producer for the show, alongside Titans director Brad Anderson. It picks up where fans last saw Peacemaker, as he gets called into action by the U.S. Government after recovering from the injuries he received in the Suicide Squad’s battle with Starro. In addition to the return of Cena, the series will also bring back Steve Agee and Jennifer Holland in their roles as Amanda Waller’s chief aides.

Outside of these familiar faces, Peacemaker will feature a large ensemble cast of Hollywood favorites. Orange is the New Black star Danielle Brooks will be playing Leota Adebayo, an original character created to serve as a political counterpoint to Peacemaker. Terminator 2 star Robert Patrick has signed on as Peacemaker’s father, Auggie Smith. Other noteworthy talent brought onto the series include Freddie Stroma as Vigilante and Nhut Le as Judomaster, two potential allies in Peacemaker’s mission to achieve peace at any cost. Cena will also be flocked by a sidekick named Eagly, who just happens to be an American bald eagle. Gunn has hinted that the show could bring back other Suicide Squad members, though he won’t say who.

Peacemaker holds the distinction of being the first television series set within the DC Extended Universe. It is currently scheduled for an eight-episode run, but both Gunn and Cena have stated that they would love to come back for more if the show proves to be successful.

On Saturday, Oct. 16, DC FanDome will offer fans an inside look at upcoming projects featuring iconic DC Comics characters. As shown in a recent trailer, the event will feature new footage from The Flash, Black Adam, Aquaman and the Lost Kingdom and Shazam! Fury of the Gods. It will also be host to top-tier celebrity guests, including Robert Pattinson, Jason Momoa, Dwayne Johnson, Zachary Levi and Peacemaker‘s own John Cena.