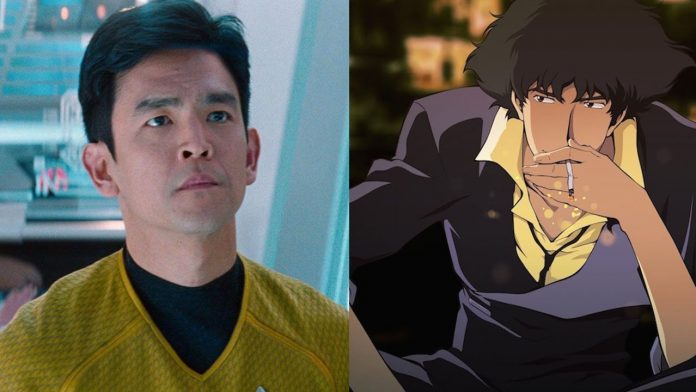 Netflix is in the process of putting together a formidable cast for the live-action TV series adaptation of Cowboy Bebop, the Japanese animated science-fiction television series animated by Sunrise.

Today, Netflix announced that the show picked up Harold & Kumar’s John Cho to play the lead role as Spike
Spiegel. John Cho is joined by Mustafa Shakir, Daniella Pineda, and Alex Hassell who will be playing as Jet Black, Faye Valentine, and Vicious, respectively.

Below are the official character descriptions released by Netflix:

Haunted by visions of the woman he loved and lost, Julia, Spike’s criminal past slowly catches up to him — putting him and the Bebop crew in the crosshairs of the solar system’s most lethal criminal organization, the Syndicate.

Jet holds tight to his honor and optimism, acting as a father figure to his misfit crew, always seeing the best in his partner, Spike… until it’s too late.

She’s always on the search for the person with the key to her identity. In the meantime, she’ll fake it till she makes it.

Once he was Spike’s best friend, now he’s his mortal enemy and is obsessed with taking him down.

The original anime series is set in the year 2071. Consisting of only 26 episodes, it tells a story about the lives of a bounty hunter crew traveling in their spaceship called Bebop. Influenced by science fiction, western films, and noir films, the main story arc focuses on Spike Spiegel seeking to put an end to Vicious, an ambitious criminal affiliated with the Red Dragon Syndicate.

Netflix’s Cowboy Bebop will consist of 10 episodes. Shinichiro Watanabe, director of the original anime, will serve as a consultant on the project. Thor: Ragnarok’s Christopher Yost will write the first two episodes.

No official premiere date has been announced as of yet.