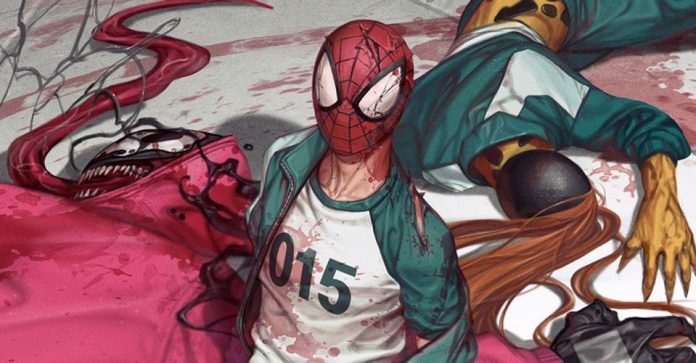 Marvel and the hit show Squid Game are crossing over in new fan art from a comic artist that shows Spider-Man beating Venom and Carnage at the violent game of life and death. InHyuk Lee, the artist responsible for this crossover, shared it on Twitter. This is certainly the kind of game that Peter Parker could find himself involved in.

Squid Game is a South Korean survival drama streaming on Netflix. It details the struggles of people who agree to play a dangerous game to escape accrued debts. The show reveals some brutal truths about the world, wealth inequality, and the lengths players will go to in order to survive. Squid Game begins with four hundred and fifty-six players who must play familiar children’s games that come with fatal punishments for losing. It is a poignant and immensely popular commentary on economic disparity within society.

On Twitter, InHyuk Lee – a South Korean comic artist – shared some fan art combining Spider-Man and his symbiote villains with the show. Considering Peter Parker’s reputation with financial troubles and continuous struggle to stay afloat monetarily, this definitely isn’t a far-fetched position for the hero to potentially be in. Also pictured here are Venom, Carnage, and Scream – all of whom have met a violent end – though Venom has the appearance of a guard being placed in a pink suit instead of the green one worn by players of the game.

In this stunning art, Spider-Man is shown wearing the number 015. This is likely a reference to his first appearance within Amazing Fantasy #15 from 1962. It is interesting to see Venom depicted as a guard, since he has also been known to have financial issues, particularly during the 1990s when he was working towards being a hero. His children – Carnage and Scream – have also found themselves as participants in the game. They’re both powerful foes and Carnage is particularly blood-thirsty, but neither appears to have been a match for Spider-Man. It may seem like an unfair advantage for Squid Game participants to have super abilities, but this actually may have been an incredibly fair match for the players. After all, the symbiotes have similar powers and none of them register as threats for Spider-Man’s spider-sense. This may be one of the most even match-ups for these games as far as superhumans are concerned.

InHyuk Lee has produced several covers, comics, and comic concept art. Recently, he provided covers for Marvel’s new Aliens series, as well as numerous other Marvel titles. His Squid Game fan art may not be an official Marvel variant, but it certainly could be if Netflix and Marvel ever decided to partner up for this dark twist on the competitions. Venom, Carnage, Scream, and Spider-Man going head to head in a death match definitely ups the stakes and their various abilities would keep things interesting.