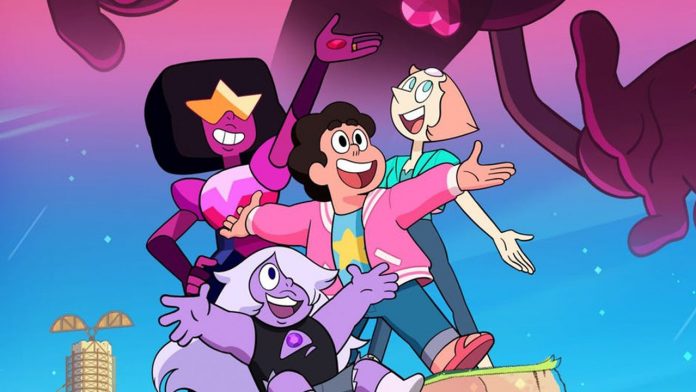 The Steven Universe The Movie poster reveals a better look at the mysterious new Gem villain set to appear in the upcoming Cartoon Network film.

The poster features the central characters of Steven (Zach Callison), Garnet (Estelle), Pearl (Deedee Magno) and Amethyst (Michaela Dietz) posing together on a cliff. Behind them is an ominous figure with an upside-down, heart-shaped gem on her chest. Check out the poster below.

The official logline for the movie is: “Steven thinks his time defending the Earth is over, but when a new threat comes to Beach City, Steven faces his biggest challenge yet.”

The release of the poster has increased speculation that the feature film will skip ahead a few years from the animated series, with evidence pointing to updated looks for Steven Universe and their beach house.

Steven Universe debuted on cartoon network in 2013 and follows the adventures of Steven Universe and the Crystal Gems Garnet, Amethyst, and Pearl as they protect the inhabitants of Beach City, all while trying to understand the strange planet Earth around them and, evidently themselves.

Steven Universe: The Movie will debut on Cartoon Network later this year.