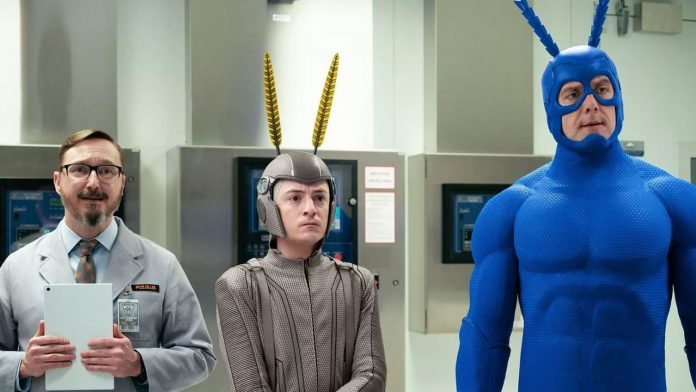 The Tick creator Ben Edlund is aware that certain elements go into creating the right kind of superhero or villain. During an interview with ScreenRant, he talks about his intentions of surrounding The Tick with key characters that not only fit the series, but also give viewers someone they can relate to in the satirical world that he’s built over 30 years.

“I think that it’s sort of like applying certain forces that don’t normally get applied to super humans, unless they do so in operatic levels. Getting across town or trying to make money, or trying to stay away from the forces of your depression and get out of the bed in the morning, and just try to have a working relationship with the ex-wife or with the parole board.”

“All these things, those are the mundane kind of feelings we understand. The fun of, and maybe some of the enduring quality of this version of superhero fun, is we really look to just get these little moments that are very, very familiar. They happen frequently because we’re making jokes of these familiar human moments that take place in the lives of people with capes and boots.”

Edlund also addressed the challenges of grounding characters so that they don’t seem too excessive:

“It’s weird, because there’s a lot of characters that are just too over the top, or they’re not funny enough. A lot of them that don’t quite make it are actually really great, but what they lack is what we were just talking about. It’s a kind of reliable through-line of vulnerability and humanity. When that’s familiar, then we have a real thing going, in general.”

This fits along the lines of what Edlund discussed about during an interview with IndieWire where he gave his idea on what superheroes represent today. Instead of focusing on “purity and wish fulfillment,” it is about how viewers can relate to the characters who act as an “instrument through which we are processing our own god-like power.”

During a time when superhero films are becoming increasingly popular, there is no denying that character uniqueness is not only important, but it is key to building long term interest.

The Tick season 2 is currently available on Amazon Prime Video.