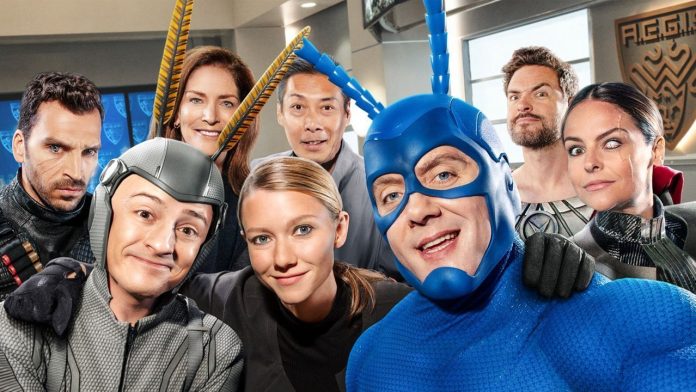 Season 2 of The Tick is finally here and it arrives during a time when superhero films and television projects are a big thing. With movies like Avengers: Endgame and Captain Marvel breaking the box office records, the creator of The Tick feels that this may be a good time for the comedic superhero series to make a breakthrough in a thriving market.

According to an interview with IndieWire, creator Ben Edlund admits that it is a challenge to bring The Tick back to television. “It is a very chilling, scary concept to try to do it again,” Edlund stated. “I’m really excited with what we’re doing now, because I feel like this is a story we can keep telling into the future.”

Edlund provided the following statement in regards to what he believes superheroes represent today:

“It’s a collective moment, and it’s a weird thing, because what superheroes used to represent, I don’t believe they represent anymore, in purity and wish fulfillment,” he said. “I think now we’re going through some kind of catharsis in the experience. There’s something different happening, which is less about just pure fantasy and more about processing, because I think things become more crucial the more they’re actually processing things for us. My guess would be that superhero fiction is now an instrument through which we are processing our own god-like power, and our angst about it.”

Season 1 follows Arthur, an accountant with no superpowers, who befriends The Tick and becomes his personal sidekick to put an end to a super-villain who is responsible for the death of his father when he was a young boy. In season 2, Arthur will have a more action-packed role as he will start off as a superhero while under the mentorship of The Tick himself. With Peter Serafinowicz playing as The Tick and Griffin Newman playing as Arthur, the series promises a whole lot of comedy.

The Tick season 2 is available on Amazon Prime Video.