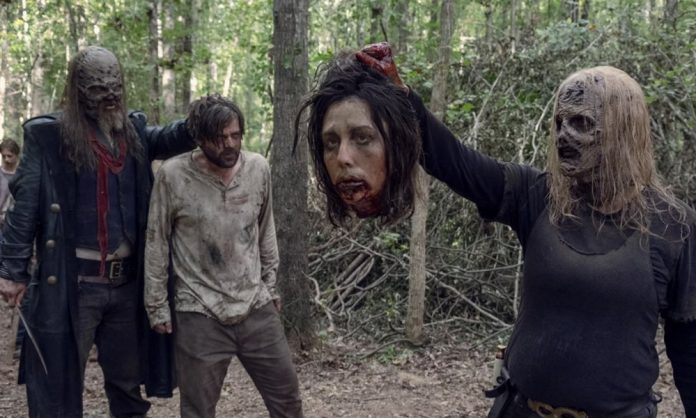 The Walking Dead packed a shocking and gruesome death into Episode 9×12 which has fans losing their heads.

The Walking Dead universe’s new villain isn’t messing around as evidenced in the latest episode’s most violent scene, and indeed one of the most gruesome moments in recent memory: Whisperer queen Alpha (Samantha Morton) asserting her dominance by decapitating a rival in cold blood — a stomach-churning demise on its own, but one that speaks volumes about where the series may head next, if you’ll forgive the poor choice of words.

In “Guardians,” the audience gets a front row look at how the Whisperer community operates, including the nauseating process of how these undercover zombies secure their fleshy disguises. But the most sickening twist of all occurs midway through the hour, when two Whisperers publicly throw down against Alpha. It does not go well for either of these challengers, as Alpha severs one’s head with a razor wire, gifts it to the survivor, then immediately kills him as well.

Below are some reactions to the violent and shocking moment…

Some fans were so shocked they literally jumped while watching the sequence unfold.