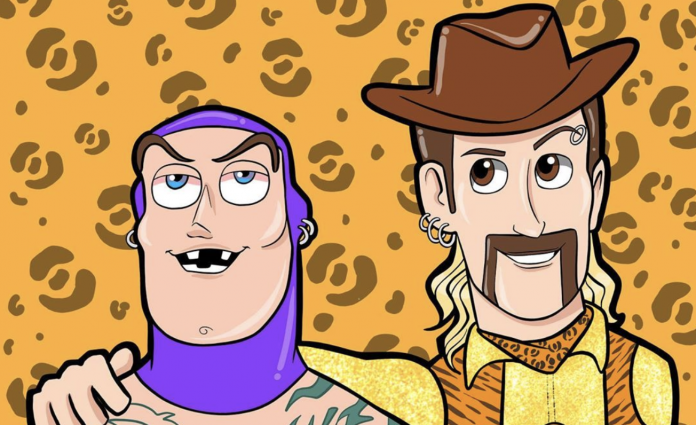 New Tiger King fanart imagines Toy Story‘s Woody and Buzz as Joe Exotic and his former husband, John Finlay. The Netflix docuseries has taken the internet by storm, and already fans have begun casting a movie version of the strange tale and creating art based on its crazy characters. There’s plenty of interest in adapting the story for a movie or TV show, with names like Edward Norton and Dax Shepard being tossed around for the lead role. (For the record, Joe Exotic’s pick is for Brad Pitt to play him in a movie.)

Tiger King: Murder, Mayhem and Madness tells the story of Joe Exotic, an eccentric zookeeper who’s arrested on murder-for-hire charges after paying someone to kill animal rights activist, Carole Baskin. The tale takes one twisty turn after another, revealing much more about Exotic, Baskin, and several others involved in America’s exotic animal trade. Tiger King quickly became one of Netflix’s most popular original shows, and now, the docuseries is inspiring some bizarre new fan art.

Created by artist Tommy Taylor and shared on his Instagram, this Tiger King fan art takes beloved Toy Story characters, Woody and Buzz, and re-imagines them in the roles of Joe Exotic and one of his husbands, John Finlay. While being completely bizarre and a little unsettling, the depiction is also pretty accurate. Check it out:

Taylor does a scary good job at making Woody and Buzz really look like Exotic and Finlay. He’s includes all sort of details that fans of Tiger King will recognize, from Exotic’s mullet and piercings to Finlay’s missing teeth and tattoos. Taylor even gives Buzz a tattoo inspired by Finlay’s own ‘Privately Owned by Joe Exotic’ tattoo, swapping out Joe’s name for Toy Story‘s Andy and using a font that looks like Andy’s handwriting.

Though Tiger King‘s story is mostly wrapped up in its seven episodes, Netflix is soon releasing an after show called The Tiger King and I. The program will be hosted by Joel McHale and feature interviews with several of the docuseries’ subjects. Notably, Joe Exotic is not a participant in the after show seeing as he’s still serving his jail sentence, but his former husband, Finlay, will appear. Finlay has already expressed his dislike for how he’s depicted in Netflix’s Tiger King, so it will be interesting to see if his opinion has changed at all given the show’s incredible popularity.