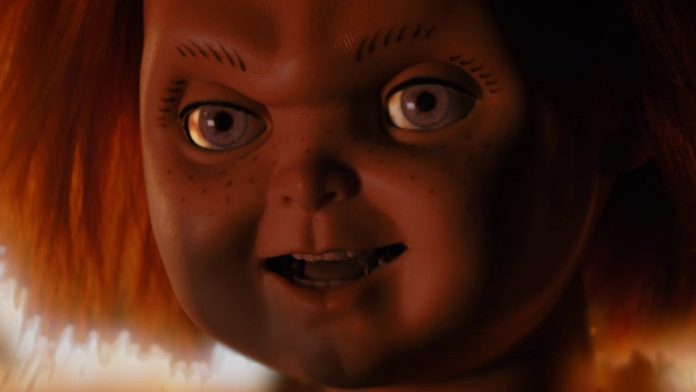 USA and Syfy released a new trailer for Chucky.

The trailer begins with a teenager recalling how violence in Hackensack, NJ always seems to spike on Halloween. Before long, that same teenager is spotted purchasing a familiar-looking Good Guy doll from a yard sale, and he later receives a mysterious phone call warning him about the doll and asking him to check the battery pack. Naturally, it’s empty. This leads the teen down the rabbit hole of Charles Lee Ray/Chucky’s history, including his encounters with Andy, and Jennifer Tilly’s Tiffany is subsequently revealed to house part of Chucky’s fractured soul.

Based on the Child’s Play franchise, Chucky was ordered to series in January 2020 after entering development the previous year. Executive produced and showrun by franchise creator Don Mancini, the project will feature the return of several familiar faces (and voices), such as Brad Dourif, Jennifer Tilly, Fiona Dourif, Alex Vincent and Christine Elise.

“The character Don and David created has terrified audiences for over 30 years,” USA & Syfy President Chris McCumber said when Chucky was ordered to series. “The longevity and legacy of Chucky speaks to the creative storytelling and the loyal fans the film series has collected over the years. We are excited to once again partner with Nick and UCP on this new SYFY series, and are incredibly proud to bring Chucky to television for the first time with the original creators.”

“I feel like Chucky has been my ticket to doing a lot of things in this business,” Mancini explained in May 2020. “One of the things that we’ve always tried to do over the course of the decades and the different movies, is we just try to switch it up a lot. From film to film, I’ve always tried to create a different tone, plug Chucky into a different subgenre. We’ve gone from straightforward slasher to comedy to crazy satirical comedy and back to straightforward horror again. With this TV show, our mission has been to preserve the straightforward scariness of the original film or the first couple of films. But at the same time, continue on with this ever-expanding tapestry of consistent story that we’ve spun over the course of seven movies and 30-some years. I think fans are really gonna love to see the new characters that we introduce into this realm and just to see how they came off of our classic characters. Not just Chucky, but some of the others that you may be hoping to see. There’s a good chance they may turn up.”